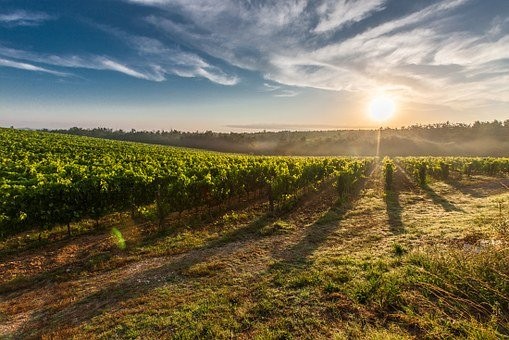 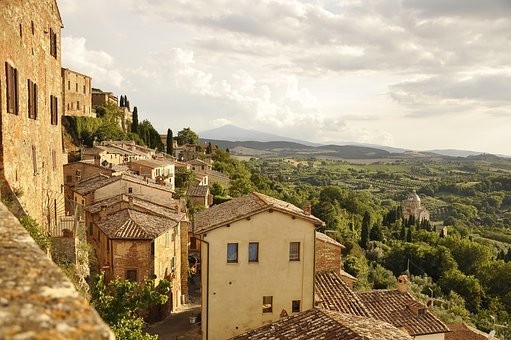 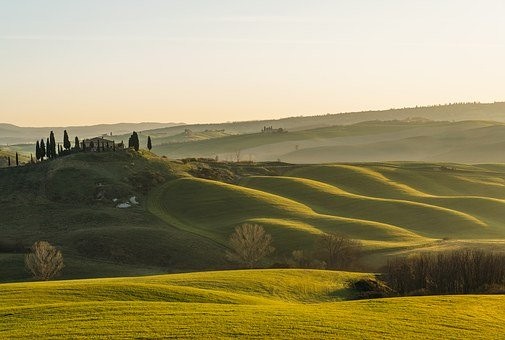 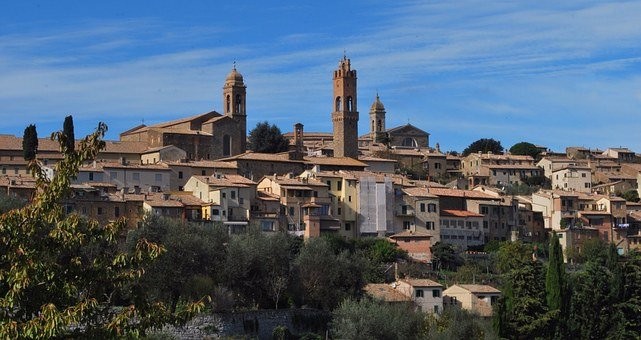 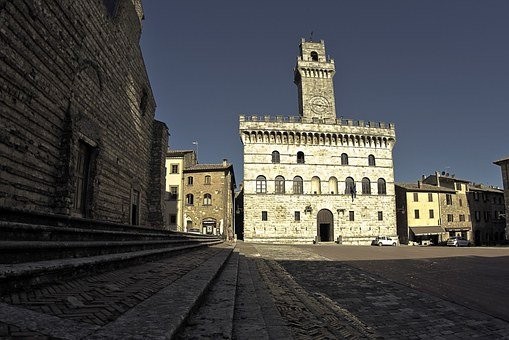 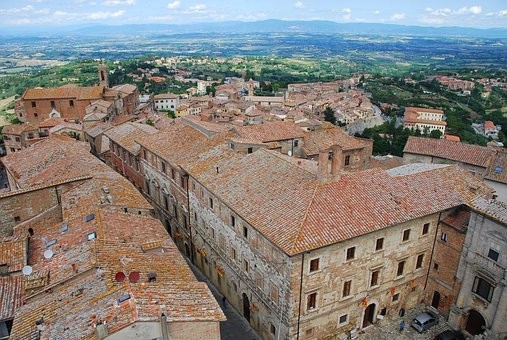 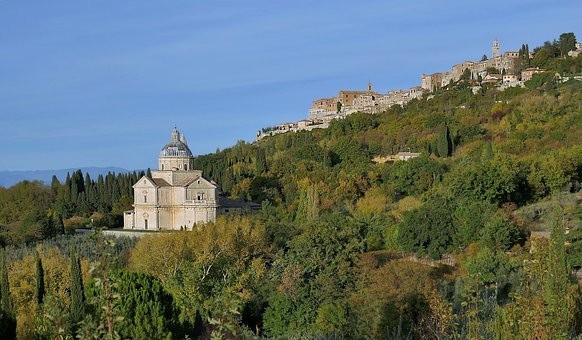 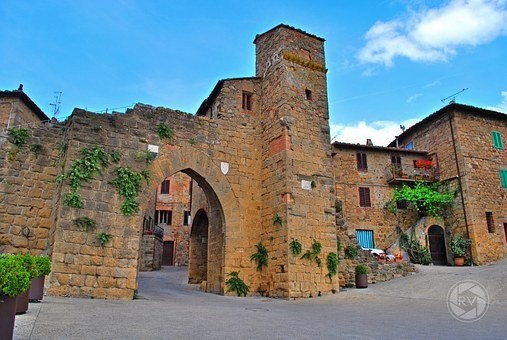 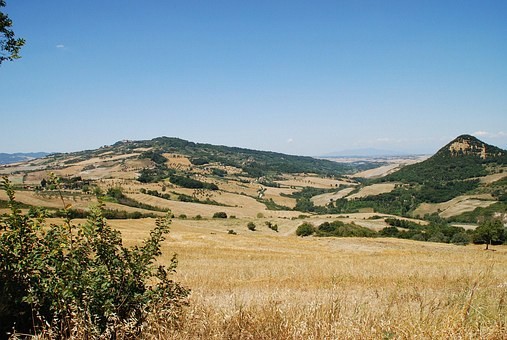 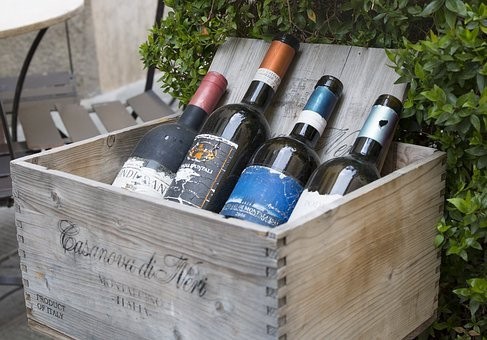 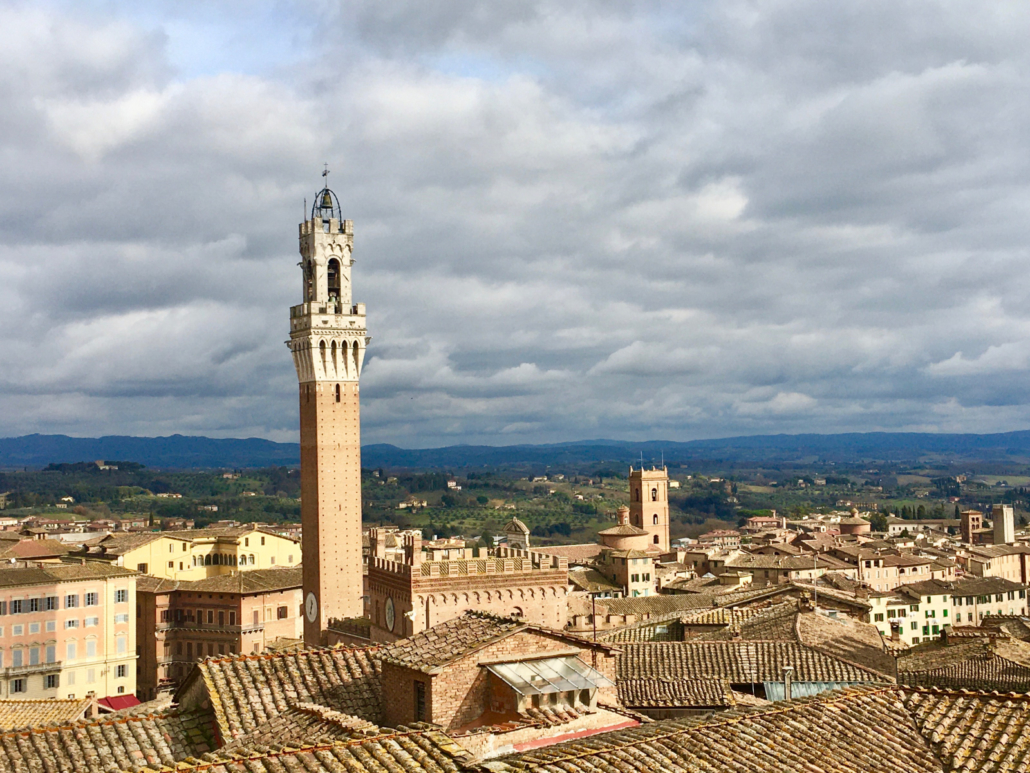 Why “Brunello and Vino Nobile: a wine tour”? You can definitely tell that these wines produced in Montalcino and Montepulciano are both the flagships of Tuscany and  Italian red aged wines for ordinary drinkers, connoisseurs, and food lovers.

Our itinerary aims at comparing the way Sangiovese grape, used for those wines, developed a whole array of flavors and aromas according to the local traditions, the land, the knowledge acquired by old or new producers, and the contribution of technology in the last decades.

“Brunello and Vino Nobile: a wine tour” takes you to the Medieval towns of Montalcino and Montepulciano located in Val d’Orcia, one of the most charming valleys of the Region, an inspirational place for painters, poets, novelists and film directors over the decades.

From the distance Montalcino looks like a bunch of Middle Aged buildings grouped around a big church on a hilltop at roughly 1860 ft.altitude, opposite to the imposing Rocca, a fortress that testifies to the subjection to Siena in 1361.

However the origins of  Montalcino date from the Etruscan times, due to its safe and strategic position.  Both artisanal and commercial activities flourished in the Medieval Age when was renowned for its tanneries, shoes and leather goods locally manufactured by skilled craftsmen.

In time peace and prosperity were threatened by harsh conflicts with the aggressive policy of Siena and Florence, and the fights between Guelphs, Holy Roman Empire supporters, and Ghibellines, Papacy’s ones. The the late 16th century Montalcino was annexed to the Gran Duchy of Tuscany and joined the path of the Italian peninsula history  up to the Modern Age.

Continue reading
and a large number of wine bars, trattorie and wine shops focussed on some local wines that made the reputation of the whole country.

Montalcino is the cradle of its most celebrated gem, the Brunello, the only robust aged red wine in Tuscany made from 100% Sangiovese grape, which holds couple of records: it is the most widely grown red grape in Italy with a percentage of 97%, the rest is shared between United States and Australia.

It seems that it originated in the Chianti area and due to its suitability and versatility, this variety spread all over Tuscany  and the nearby Emilia- Romagna regions, although the quality has always been variable, based on complex, velvety and long lasting wines in the former region and light, colorful, and easy drinking wines in the latter one.

Chianti Classico area is only 70 miles south of Florence, but Montalcino had the most gifted soil, exposed to the fresh air and the warmest rays of sunshine, rain was drained by the steep slopes, as well as the wide temperature ranges for peculiar aromas and flavors.

The glorious history of this wine is strictly related to a family, the Biondi-Santi who discovered the potential of the soil around a hill topped by Montalcino, the only place totally suited to the production of a great wine.

In 1888 Ferruccio Biondi-Santi isolated the superior Sangiovese clone, the Brunello due to its dark skin, an event which marked the beginning of a legendary red wine.

Brunello wine was agreed the DOC status -quality level- by the Department of Agriculture  in 1966, and the  DOCG one -top level– in 1980, the first red Docg wine in the country.

You will be fascinated by the terraces scoring the hillside vineyards, the preservation of the environment and the typical rural country house of the wine producer selected for our tour.

Our tasting intends to offer you the range of wines included in the Brunello denomination according to the seasonal availability, beginning with the wines blended with Cabernet Sauvignon, Merlot, Cigliegiolo, Canaiolo Nero, in order to improve sensory qualities.

Then we continue with Rosso di Montalcino DOC, a fresh and fruity younger Brunello made of second choice Sangiovese grapes without any blend, and conclude our experience with the famous Brunello di Montalcino Docg, marked by intense red ruby color, rich aromas and flavors of black cherry, blackberry, plum and sweet spices, with an elegant and smooth finish.

Each glass of wine is paired with the tasty, rich products of the tuscan countryside, like finocchiona salami, smelly Pecorino cheese flavored with different herbs of truffle.

A quick but hearty lunch will follow in a traditional Trattoria. Montalcino culinary traditions are old, genuine, simple and definitely meat based, although vegetables and legumes are used to pair dishes or served as a main course. You can choose among various “crostini” appetizers, to begin with, based on chicken livers and capers, wild mushrooms or wild boar sausages, “cinta senese” pork – a local specie-, hand-cut cured ham, fresh salame. Then you can treat yourself with home made pasta, like “Pinci” or Pappardelle with red sauce, bean and onions soups in wintertime. It’s hard to resist succulent main courses like chicken roasts, tripes in saffron sauce, mixed fry vegetables, and the full flavored wild game dishes.

If you have a sweet tooth, don’t forget the variety of the artisanal “biscotti” with almonds, hazelnuts, cocoa, served with the Vin Santo dessert wine in order to soften the dry cookies.

The “Brunello and Vino Nobile: a wine tour” is not over yet, so we drive to Montepulciano hilltop, located at 1985 ft altitude, slightly higher than Montalcino, even if both historical centers are totally pedestrian, a real treat for regular visitors!

From the main gate, Porta al Prato, we walk a uphill major street lined with all sorts of colorful shops, which ends at Piazza Grande, an impressive large square surrounded by the Palazzo Comunale, modeled on the same one in Florence, and the imposing brickwork of Santa Maria Assunta’s Cathedral  built between 1594 and 1680.

Montepulciano shares with Montalcino the history of regional winemaking despite the competition of Vino Nobile with Chianti which constantly increased both the quality and the popularity over the decades.

For this reason in the early 20th century the Vino Nobile di Montepulciano was almost a faint memory of the past, until 1933 when the Vino Nobile of the Cantina Faletti was highly praised during a National Fair in Siena, an event that marked a new rise in the history of this product.

Local producers strongly believed that they could do much better than before, so the Sixties brought new energy to indigenous enterpreneurs. Their efforts were rewarded with the Doc recognition in 1966 and the Docg in 1980, the same as the Brunello, although the Vino Nobile managed to stand out from any Tuscan wine, and find its own place between Chianti and Brunello.

You will hardly forget the board aromas and the fine texture of these wines, the small dark fruits followed by balsamic herbs and spicy hints, the soft tannins and the savory aftertaste!

Aside from “Brunello and Vino Nobile: a wine tour”, we suggest you to read  A taste of Chianti too and Wine and food delights in Florence at www.walksinsideitaly.com