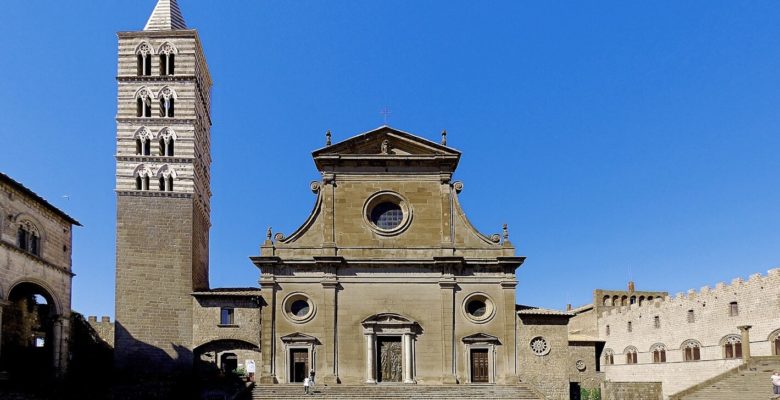 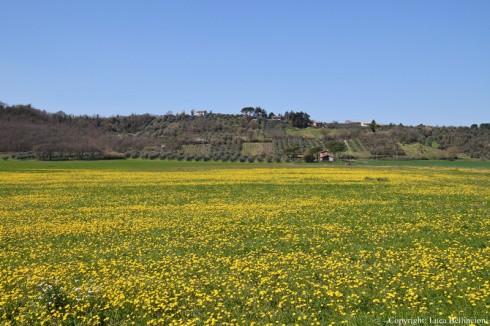 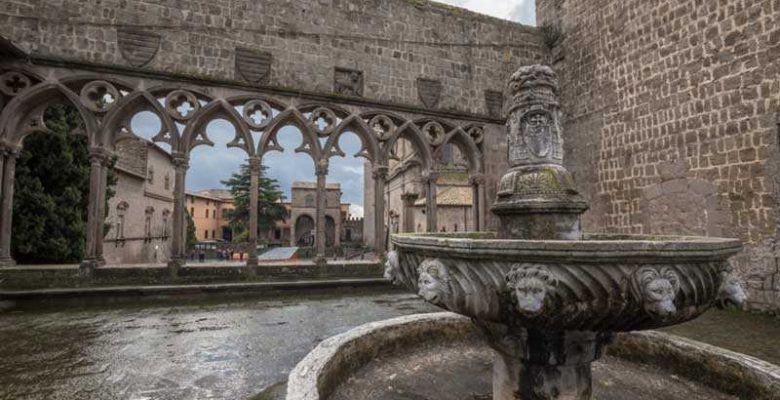 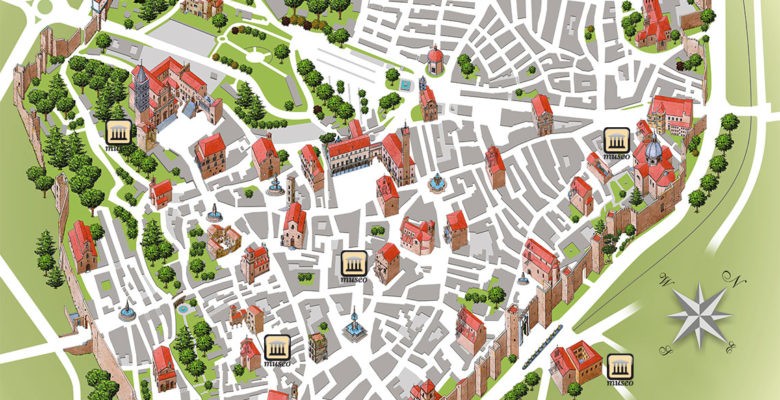 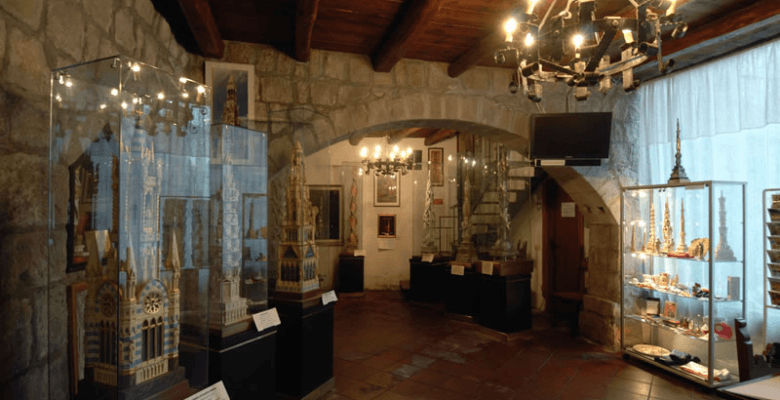 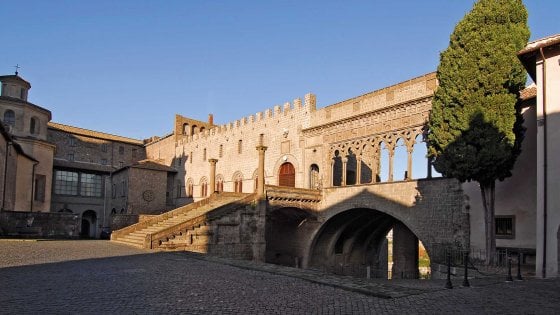 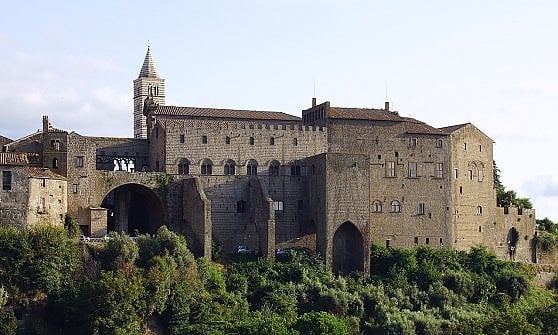 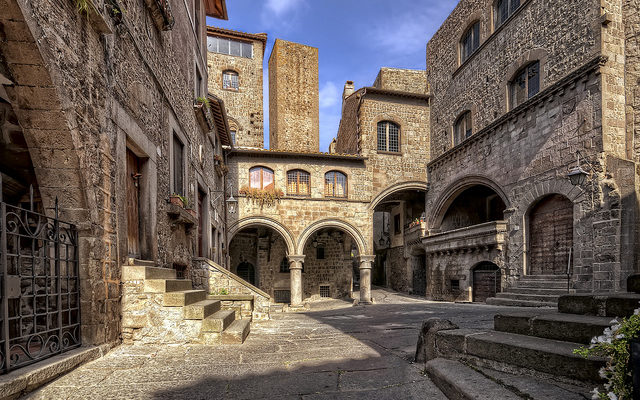 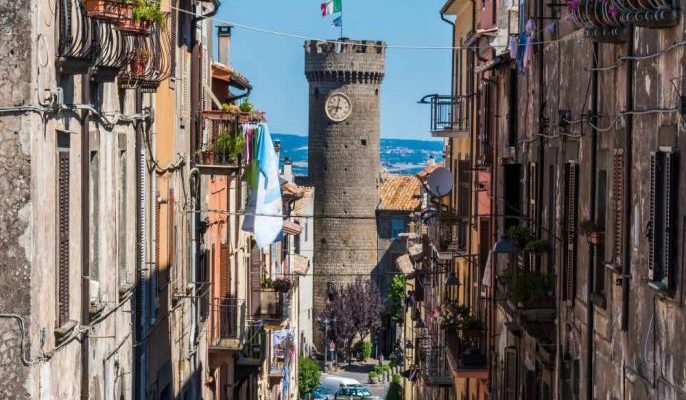 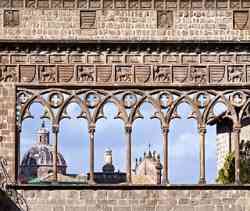 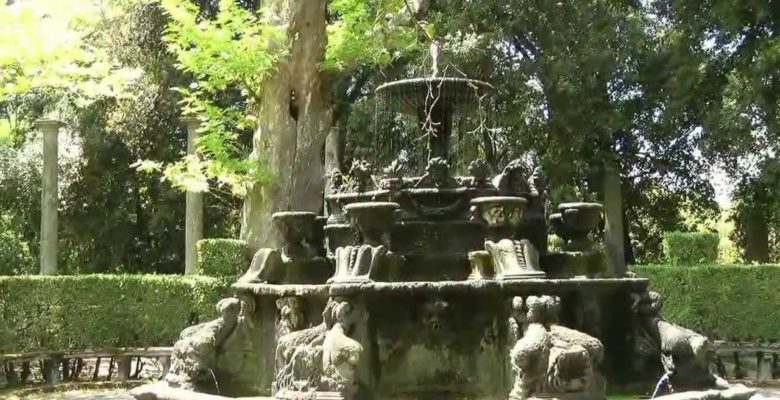 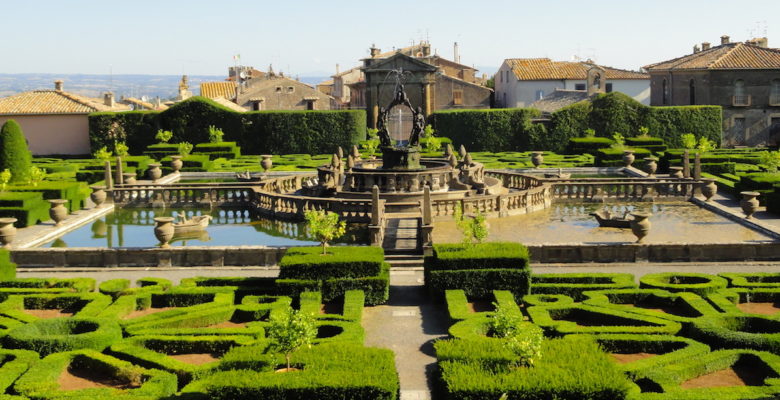 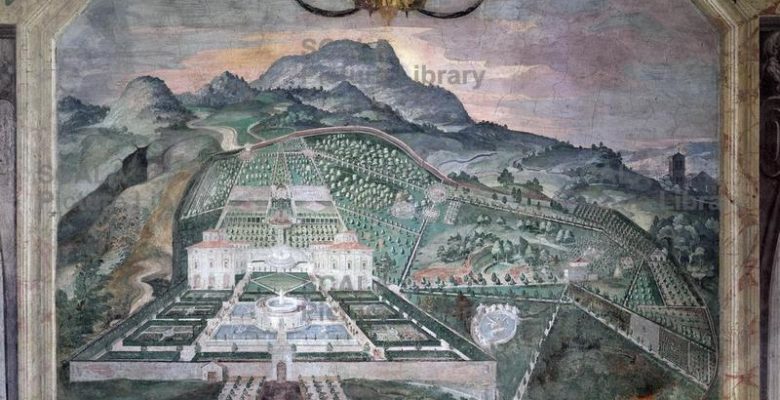 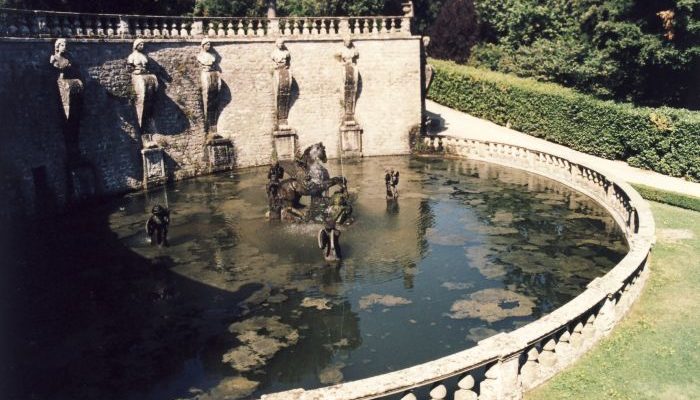 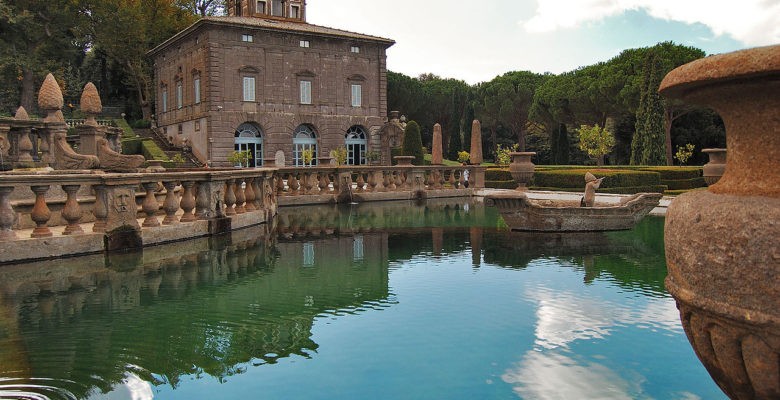 You’ll be picked up at the hotel if you’re in downtown Rome, and in about 1 and ½ hour drive we’ll reach our first stop, Viterbo. The region in which we’ll spend our day, once home to the Etruscans, is called Tuscia.

Viterbo had its highest moment of glory when, in the 13th century, it became the seat of the papal court for a period of 24 years (1257-1281). The Palace of the Popes still maintains today all its medieval austerity and powerful appearance.

Our Viterbo & Bagnaia tour begins at Porta Romana, and, with the help of our local guide we visit all the historic center, entirely surrounded by its dark peperino stone walls, built between the 12th and 13th centuries and stlll perfectly preserved today.

Past the Church of San Sisto, we stop to admire the Romanesque-Gothic Fontana Grande, the largest and most famous fountain in Viterbo, built in 1212 and enlarged several times. This elegant construction is one of the town’s most famous and admired symbols.

We head now to the district of San Pellegrino, considered the best-preserved Medieval neighborhood in Italy, that will enchant you with its arches, towers, external staircases, small hanging gardens. Antique shops open along the alleys.

At Piazza San Pellegrino we’ll admire Palazzo degli Alessandri. In this, which is perhaps the most picturesque corner of Viterbo we’ll conjure up the dark times when Guelphs and Ghibellines fought for power.

We’ll also have a look at the exhibit of ‘Santa Rosa’s “machines”, were moving memories of Viterbo’s most important religious holiday are preserved. In 2013 Santa Rosa’s ‘machine’ was recognized as Unesco’s ‘intangible cultural heritage. It consists of a 100 feet high tower, newly rebuilt every year, and carried around in procession on Santa Rosa’s day, September 3rd.

Our Viterbo & Bagnaia excursion finally reaches Piazza San Lorenzo, which enshrines two of the most significant historic buildings: San Lorenzo Cathedral and the Papal Palace. You’ll learn about the vicissitudes of this imposing Romanesque building, reconstructed after bombing in World War II, admire its Cosmatesque floor, and then proceed to the Papal Loggia.

The Loggia, built in 1267, is a spectacular Gothic construction, graced by a series of seven pointed arches with elaborate, elegant decoration, is probably the most photographed spot in Viterbo. You’ll learn about its construction, use, and partial collapse in 1325.

We reach Piazza del Plebiscito (Piazza del Comune for the locals), since the 13th century political heart of town, austere and elegant at the same time. Palazzo dei Priori, completed in the 16th century, stands out for its monumentality. We’ll walk in to enjoy its garden, great views on the green valley below, and exquisitely decorated Renaissance rooms.

After lunch (Viterbo and the Tuscia region are an oasis of excellent, genuine food!)

a 15 minutes’ drive will take us to Bagnaia,

situated along the historical ‘Via Francigena’, which lead pilgrims from France to Rome and then to South Italy to depart for the Holy Land. Bagnaia, a small Medieval jewel which always belonged to popes and cardinals, is famous for its beautiful fountains and palaces. We’ll admire the coats-of-arms of all the different families here and then we’ll head to Villa Lante, which is the reason of our visit here.

Your private guide will illustrate the architectural history of this villa and its world-renown gardens, whose overall design is attributed to architect Vignola. The original proprietor was Cardinal Gambara, who loved living outdoor and eating in green surroundings.

At the death of Gambara, in 1587, the Villa was completed by a 17-year-old Cardinal, Alessandro Peretti, nephew of Pope Sixtus V.

The perfect proportions, and all the details – terraces, fountains, cascades, artificial islands, grottos, partly inspired by Hadrian’s Villa and by Villa d’ Este in Tivoli are absolutely enchanting and will keep you openmouthed all the time! This kind of gardens are known as ‘Mannerist Italian surprise gardens’, and yes, every step will be an eerie and delightful surprise!

Our Viterbo & Bagnara tour comes to an end, we say goodbye to our guide and head back to Rome, expecting to be back to the hotel around 6.00-6.30 pm.