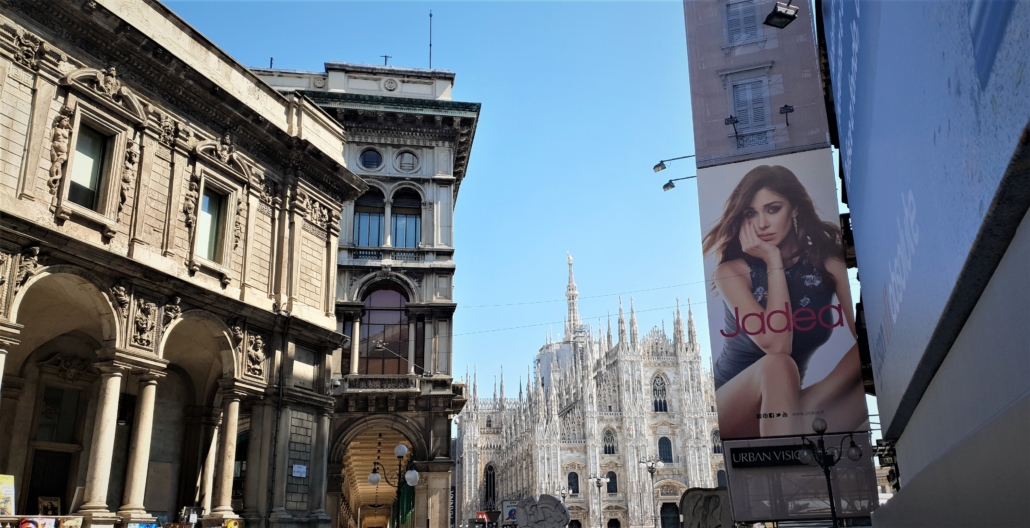 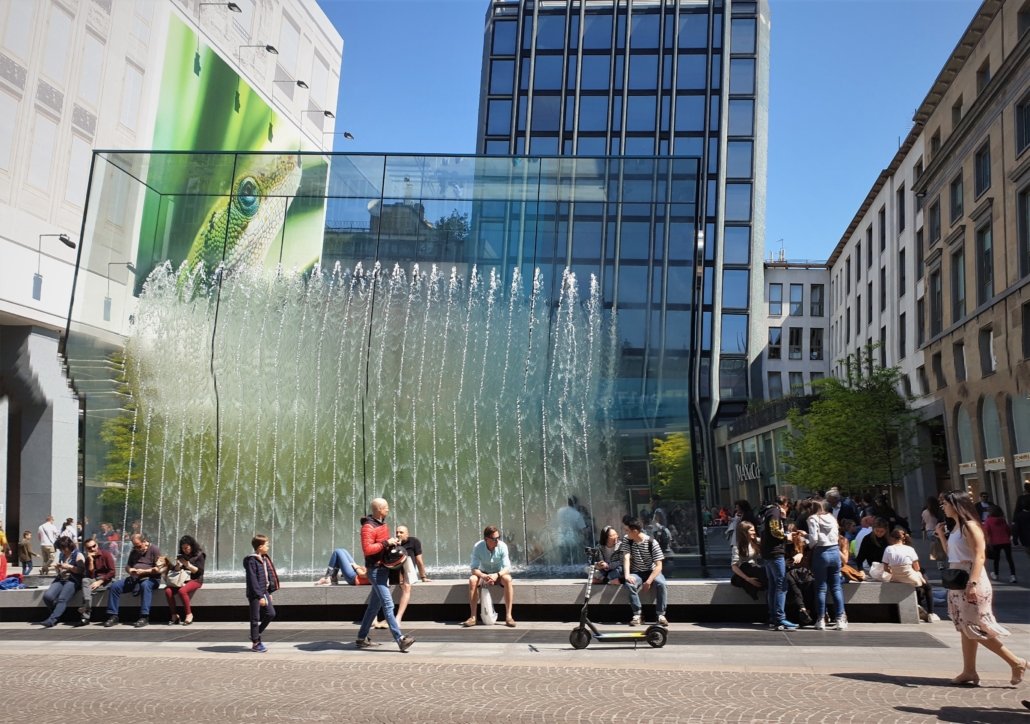 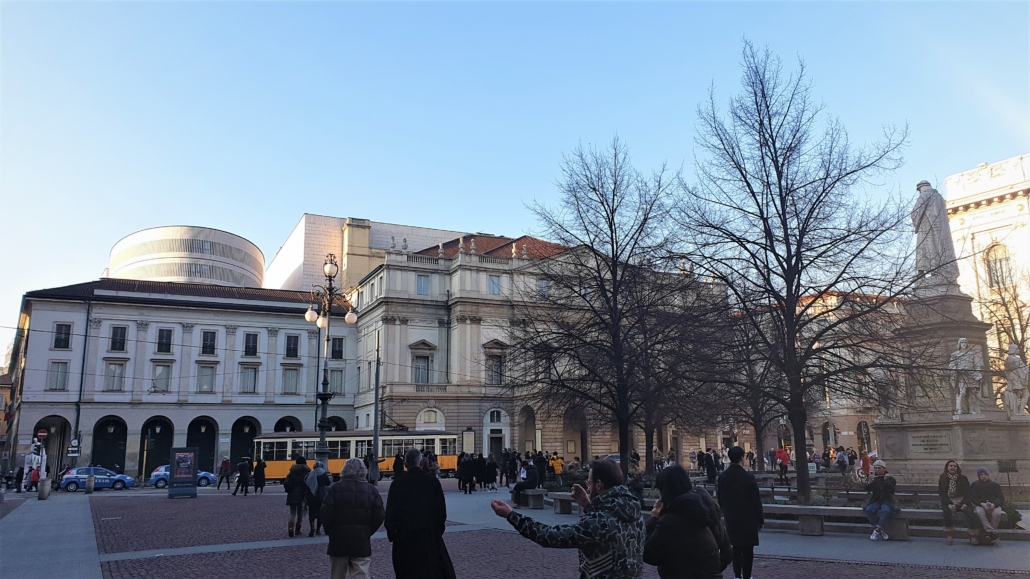 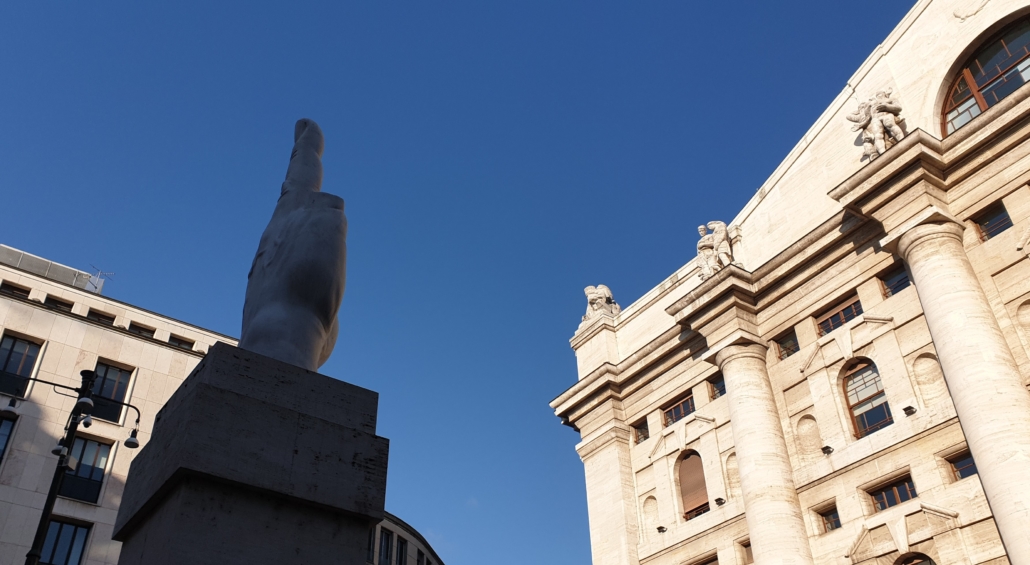 The squares of Milan vibrate with the intense, frantic energy of the city. You can find monumental Ancient Roman ruins just steps away from signature XXI century sculptures, Fascist architectures next to paleo-Christian churches.

You can see any kind of people, eat any kind of food and sip any kind of drink…it is the most cosmopolitan city in Italy. It might not be as glam as Venice, Rome or Florence, but it will strike you!

Our ‘Squares of Milan’ walking tour focuses on the historical center (to visit the new squares of Milan please check our contemporary tours section) and starts ideally with hectic Piazzale Cadorna, restyled at the end of the XX century by the celebrated architect Gae Aulenti, who redesigned the Northern Railway Station as well.

The final touch was given in 2000 by the unveiling of a huge, fun and surprising installation.

The giant ‘Needle, Thread and Knot’ is split in two section: the needle and thread are stuck vertically in the ground, while the knot pops up from a water pool. The authors are two American artists, Claes Oldenburg and Coosje Van Bruggen. The colors are yellow, red and green, are the same of Milan’s underground lines.

The meaning? There’s certainly a reference to the fashion industry, and, more in general, to the proverbial industriousness of Milan. The whole new asset of Piazzale Cadorna is much controversial.

An interesting test could be stopping some of the busy commuters passing by and ask their opinion about it: maybe they don’t like it, but you can be that anyone has an opinion, as the impact is strong, not just another square…

Here in Milan, as in any other great modern city, industry goes hand in hand with finance. Our discovery tour continues with a stroll to almost metaphysical Piazza Affari (= Business Square): here the two protagonists, or antagonists, are the massive and pompously solemn Palazzo della Borsa (= Stocking Exchange Building, 1932) and the irreverent

The giant hand, that mimics the Fascist salute, has all the fingers but the middle one cut off, as those of an ancient ruin. Cattelan’s provocative finger rises both against Fascism, whose ideals and symbols pervade the architectures of the square, and against the terrible economical crises triggered by finance at the start of our millennium.

Your guide will tell you more about what goes on today in this slightly disconcerting site.

Be ready to jump back 17 centuries, as our ‘Squares of Milan’ tour touches now the rests of Emperor Maximian’s Palace, when Mediolanum (today’s Milan) was the capital of the western Roman Empire.

Here you can still admire the vast portions of decorated floors and imposing walls that witness its wealth and past splendor. Nearby we admire Torre Gorani, the only medieval tower of Milan spared by WWII bombs.

Our walk will proceed to an area which is most dear to the heart of the Milanese and which enshrines one of the oldest churches, the Early Christian Basilica of Sant’Ambrogio (IV century), dedicated to the city’s Patron, Saint Ambrose.

We warmly advise you to visit the precious interior, preceded by a spectacular rectangular porch. You’ll learn from your guide about the history and many legends referred to Ambrose.

All Milanese kids love Piazza Sant’Ambrogio because of the traditional market of the ‘Obej Obej’, starting from December 7th, where street vendors sell sweets, hand-made toys and ethnic objects.

Because of the long-lasting works of restyling of the square, the ‘Obej Obej’ was recently moved to the Sforza Castle. Here you’ll see the Devil’s Column, bearing the two holes left by the Devil’s horns while fighting with Ambrose!

It is now time to direct our (tired) feet to the core of Milan, starring Piazza del Duomo, Piazza della Scala and the newly restored (2015) Gallery.

Depending on time, weather, tastes and mood we’ll make up our mind and decide where to sip a ‘barbajada’ (ask your guide for the recipe) while learning about Mr Barbaja and the Caffe’ dei Virtuosi, or, if you prefer, enjoying an aperitif or a good gelato watching the world go by.